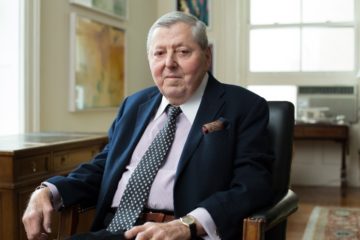 NEW YORK, NY, February 27, 2018- The Pollock-Krasner Foundation mourns the loss of Chairman and Chief Executive Officer Charles C. Bergman, who organized the Foundation at its inception and guided it for more than three decades with great wisdom and generosity.

Born in 1933 and raised in Boston, Baltimore and Pittsburgh, Mr. Bergman graduated from Harvard in 1954 and dedicated the early part of his career to the field of mental health. After serving as a Vice President of the People to People Health Foundation (Project HOPE), he became a special advisor in mental health under Presidents Nixon, Ford and Carter. Beginning in the early 1970s he was the head of the largest psychotherapy training program in the United States, the Institutes of Religion and Health, which he formed by merging the Academy of Religion and Mental Health with the American Foundation of Religion and Psychiatry.

In 1984, at the request of Lee Krasner’s attorney, Gerald Dickler, Mr. Bergman agreed to serve as a consultant on forming a charitable foundation, to be established with the assets of the estates of Ms. Krasner and her husband Jackson Pollock. When the foundation was granted legal approval in April 1985, he became Executive Vice President of the Pollock-Krasner Foundation, serving at first with President Eugene V. Thaw (co-trustee of Lee Krasner’s estate). He soon assumed the role of Chairman and CEO and was joined by Kerrie Buitrago as Executive Vice President, and upon Mr. Thaw’s retirement as President worked closely with his successor, Samuel Sachs II.

It was largely because of Mr. Bergman’s insight that the Pollock-Krasner Foundation defined its mission as providing cash grants to worthy individual artists in need, in the United States and around the world. Under Mr. Bergman’s leadership, the Pollock-Krasner Foundation awarded more than 4,400 grants totaling more than $71 million to artists in 77 countries. Mr. Bergman took special pleasure in personally informing each grantee of his or her award.

Mr. Bergman is survived by his spouse Stuart Levy, whom he married in 2015.